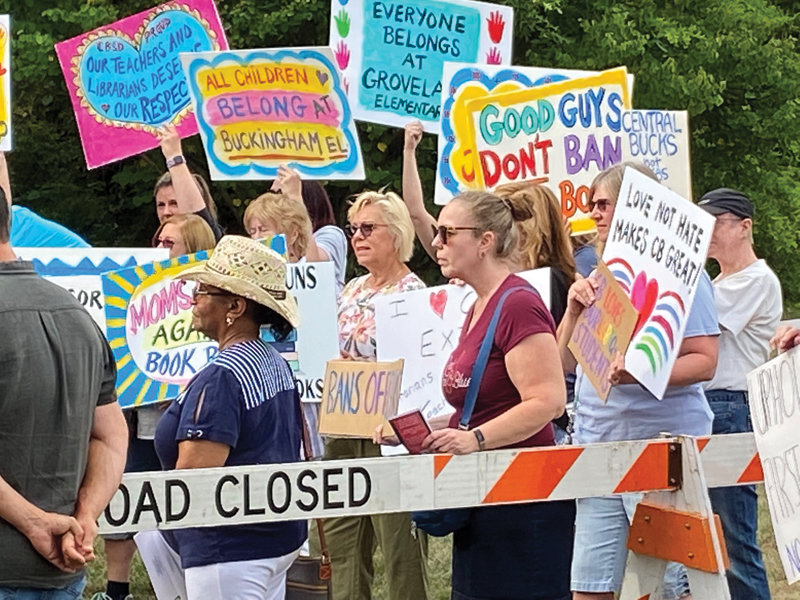 When the Central Bucks School Board voted to hire public relations firm Devine + Partners, as well as approve the controversial Policy 109.2, several members adamantly opposed the board majority.

Among them was Karen Smith, a board member with a history in Central Bucks public relations, who has attended over 20 years’ worth of school board meetings, both as a parent and as a member of the board.

At the July 26 school board meeting, the board majority approved Policy 109.2, a new book review policy that gives district residents the power to ban books from school libraries, should they and a superintendent appointee deem the books’ material too inappropriate or sexual.

Many who are against the policy fear it may be used to single out and remove minority-centered narratives, particularly books with LGBTQ+ themes. Shortly after adopting the policy, the board majority also approved hiring the Philadelphia-based PR Firm Devine + Partners for a one-year contract which will cost the district over $180,000, or about $15,000 per month.

Smith voted no to both policies, as did Dr. Tabitha Dell’Angelo and Dr. Mariam Mahmud. However, both board President Dana Hunter and Vice President Leigh Vlasblom voted for the policies, in addition to members Debra Cannon, Sharon Collopy, Jim Pepper, and Lisa Sciscio. This resulted in a 6-3 vote on both the PR firm contract and Policy 109.2.

“Even now after it has passed, I remain opposed,” said Smith in an exclusive over-the-phone interview, referring to Policy 109.2. In her eyes, the policy needed much more revision time, as two very big issues within it had yet to be addressed. The first, notes Smith, has to do with the policy’s vague language and its inability to solidly define what counts as “inappropriate material”. In Smith’s own words, “the policy basically places a ‘sex filter’ over our books,” and she argues that such a broad book ban would be in violation of schools’ right to free speech, as defined by the Supreme Court in past cases.

The second issue the policy possesses, according to Smith, is in how books are to be reviewed. In Policy 109.2’s current state, any person in the district can propose banning a book, and it only takes one other person’s approval for the book to be banned. “You can’t have a situation with a small number of like-minded people are evaluating your books,” Smith says. “The policy needs to specify who will be in the committee.” The way the policy is set up now, Smith also fears that whoever is appointed could be easily intimidated by the chain of command. The school board is responsible for hiring the superintendent, and the superintendent, under Policy 109.2, is responsible for hiring the book reviewer.

The policy asserts that “school libraries are not public forums,” a concept that Smith finds both baffling and “very un-American”. In her own words, “a school library is definitely a public forum.”

At the moment, Smith’s chief concern is towards marginalized student groups, many of whom spoke against the policy.

Concerning the second controversial decision of the July 26 meeting, hiring Devine + Partners, Smith read aloud the speech she gave that night when announced she would not vote for it:

“Many of you know that my background is in school public relations. I believe deeply in the value of good communications for schools. Our current communications team is doing an outstanding job showing the accomplishments of our students and staff, and telling the story of education in CB. Hiring the PR firm is not about trying to tell the story of education in CB; it’s trying to deflect away from all the bad, intolerant policy this board majority has passed in the last few months. It’s trying to quiet the dissenting voices to these policies. It’s trying to hide that some members of this board are being shut out of decisions entirely. This is not a costume party. You can’t dress up ugly policy and make it beautiful. Let’s make decisions that are good for all students, and public relations will run itself. I’m voting ‘no’ on this item.”

During the interview, Smith cited several recent policy decisions made by the school board, from canceled field trips to the removal of LGBTQ+ Pride Flags in classrooms, to instructors requiring parent permission to use a student’s preferred name, and more. To the queer community, it feels like a targeted attack. “When we have what seems like a targeted attack on one group, it’s concerning,” says Smith, who also makes note of the recent increase in homophobic comments the board has received over the past two or so years. “It’s not just happening in Central Bucks; it’s happening all around the country, and I do feel like it’s a coordinated effort to try and continue to marginalize that group of students.”