Contact Us Where to Find Us Donate
Get our newsletters Donate Subscribe
Monday
PARTLY CLOUDY  93° F
/stories/pivots-of-american-history-part-one,15544

Read the Herald
Get our headlines in your inbox
Sign me up!
Another Voice

The commandant’s house at Fort Mifflin. American soldiers held the fort to prevent British ships from reaching the port of Philadelphia with supplies for British troops, who occupied the city.
Posted Thursday, March 3, 2022 12:45 am 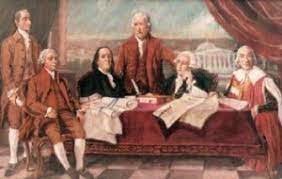 Following is an excerpt from a memoir in progress. It relates the involvement of family members and others at the time of the American Revolution and continuing struggles as America took shape.

Jonathan Rumford Jr, my fourth great-grandfather through the line of my paternal grandmother Ada Rumford, was a prominent citizen of Wilmington, Del., grandson of John Rumford, Quaker, who departed for America in 1698, initially joining the Monthly Meeting of Friends at Middletown, Bucks County, Pennsylvania (Langhorne), then the Meeting in Gwynedd Township in 1721.
During the Revolutionary War, through the influence of Caesar Rodney, signer of the Declaration of Independence for the state of Delaware, Jonathan initially served as lieutenant, then captain, upon George Latimer’s completion of his commission, of the Independent Delaware Company or Flying Camp Battalion, a unit that rapidly moved about gathering intelligence on troop movements.
Caesar Rodney served in the Continental Congress for the colony of Delaware along with Thomas McKean and George Reed. At Philadelphia, McKean and Reed were deadlocked on the vote for Independence; Rodney was preoccupied with Loyalist resistance at home. News of the deadlock got to Rodney.
In order to break the deadlock, Rodney, apparently already ill, rode 70 miles through a thunderstorm on July 1, 1776, arriving at Independence Hall in “boots and spurs” on July 2 just as the vote was beginning. His vote with McKean allowed Delaware to join with the other colonies in support of the resolution for independence. The final wording was approved within two days.
Tragically, in his latter years, Rodney wore a green scarf to shield his disfigured face, which was ravaged by cancer. He died within eight years of its onset.
Jonathan Rumford’s two dispatches written to Brigadier General Potter concerning the defenses of Fort Mifflin in 1777, relayed to Washington the same day, are snapshots of an overall pivotal and courageous battle inexplicably neglected by many historians.
Recently I visited the new Museum of the American Revolution at 3rd and Chestnut streets in Philadelphia. The back of my admission ticket informed me that “you don’t know the half of it,” a rather surprising statement considering there was no mention of the Battle of Fort Mifflin among the display cases and video displays throughout the building. The battle’s absence was somewhat ironic in that this conflict occurred about 5 miles as the crow flies from the museum.


An informed young gentleman displaying with a colleague typical Colonial garb to visitors on the second floor agreed in principle with me concerning this forgotten battle of the American Revolution.
Taking into account the confusion of battle, the slightly differing eyewitness reports, with a little work one can produce a fairly accurate scenario.
The British fleet made slow progress up the Delaware River, deftly managing to avoid the chevaux-de-frise – sharp pointed logs projecting from frames sunk in the river to pierce the hulls of ships – and positioning their warships off the southeastern bank of Mud Island. Included among their weapons was the 74-gun flagship, the Somerset. The 50-gun Isis, which had already been battling with the Mantua batteries on the New Jersey shore, including Billingsport, sustaining considerable damage to its hull and rigging, joined the Somerset along with the Pearl, Roebuck and Liverpool. The Vigilant, described as a converted East Indian merchantman and the gun sloop Fury were anchored off the southwest bank of Mud Island
There were about 350 men at Fort Mifflin. These gallant men were caught in one of the most brutal, merciless crossfires of cannonade in the Revolution.
In support of the attack on Fort Mercer on the New Jersey shore while simultaneously bombardingFort Mifflin, the 64-gun British ships Augusta and Merlin, apparently ran into a chevaux-de-frise, both ships going aground. The American forces targeted these ships. The Isis attempted a rescue. The British subsequently maintained that wads of gun cotton began the fire on the Augusta. The troops in Fort Mifflin claimed it was a lucky hit.
As the fire spread it evidently reached the powder magazine and the Augusta blew up with a substantial death toll among the British. The blast broke windows in Philadelphia, its then southern city limit at about the present South Street. Reports claimed the blast was heard nearly 30 miles distant in Trappe, Pa. The Merlin was abandoned.
Eventually the odds against Fort Mifflin were hopeless. Outgunned in number and caliber and undermanned, the fort fell. General Varnum, who commanded the forces on the New jersey side centered around Fort Mercer, sent boats over to Mud Island and roughly 300 men were evacuated in the dark of night.
Russell Howard Satterthwait of Lansdale resided in Philadelphia most of his life except for two years serving with the U.S. Army, 3rd Division in Schweinfurt, Germany in the mid-1960s. A graduate of Temple University, he is the second oldest of seven children. With ties to Bucks County, he suggested that readers of the Herald might enjoy his historical account.