Contact Us Where to Find Us Donate
Get our newsletters Donate Subscribe
Monday
PARTLY CLOUDY  93° F
/stories/bridget-wingert-happy-to-be-here-a-timeline-parallel-to-the-heralds-growth,18825

Happy to Be Here: A timeline, parallel to the Herald’s growth

The Herald’s mule has moved to the newspaper’s new office at Easton and Sawmill roads in Plumstead Township. The address is 875 N. Easton Road, Doylestown 18902. Aleas Gomez, left, and Augusto Espinoza, right, from Hugh Marshall Landscape Contractors installed the mule. Quint Meredith, the Herald’s operations manager, is in the center.
Posted Thursday, August 4, 2022 12:00 am 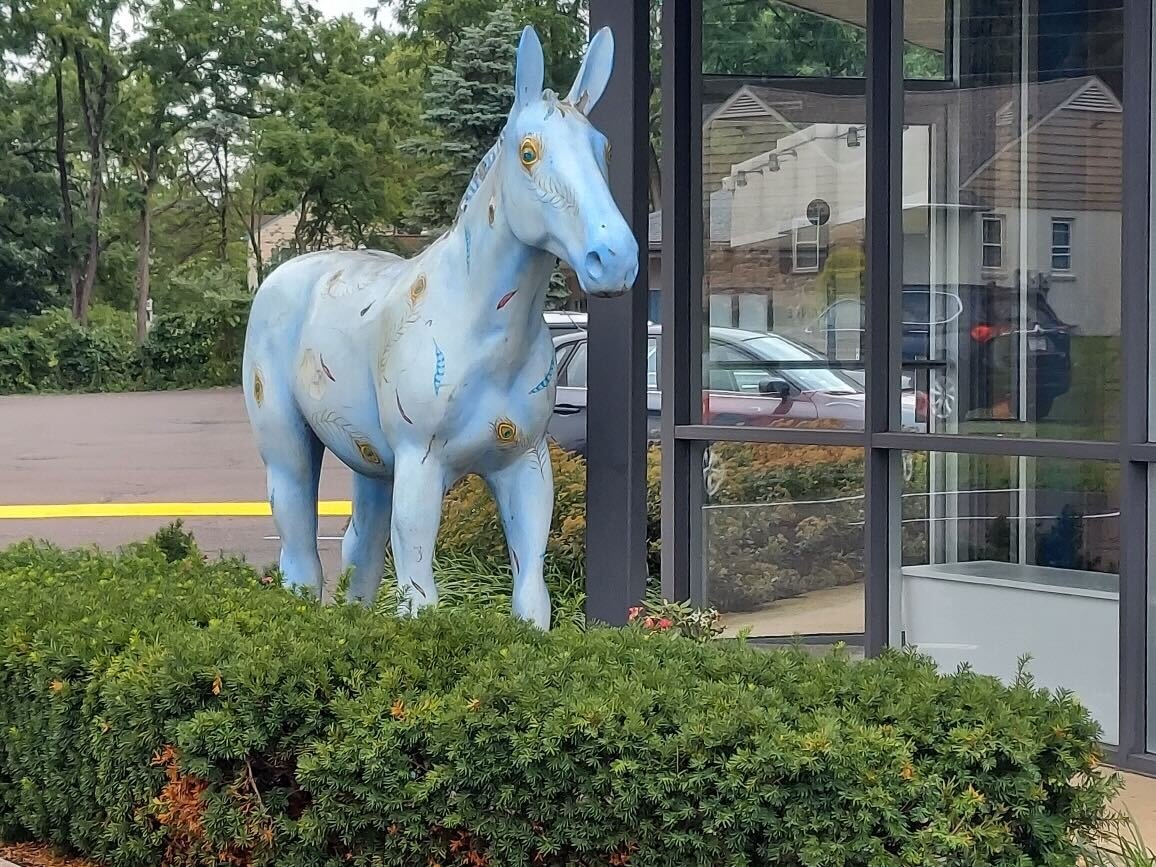 The Herald relocates to Doylestown

I’m writing from a new office this week, the third for the Bucks County Herald – five in a Hollyberry Square storefront, almost 15 just down the road in Lahaska, in a remodeled house whose original date was 1834. Now I am at the edge of Doylestown, watching traffic go by on busy Easton Road.

The new office is in a functional one-story building the Herald shares with other companies. We have less space but that’s what we wanted, considering the number of employees work mostly from their home offices. There’s room for parking and for big trucks that unload large quantities of newspapers and other publications. And at the corner entrance we hope to install a sign that’s visible from the highway.

Mulefeathers, the painted mule we bought in 2002 during a fundraiser for the Michener Art Museum and the Friends of the Delaware Canal, has moved with us twice. For a while, the Central Bucks landscape was dotted with painted mules but just a few are still standing on local roads.

The move to a new space comes close to the Herald’s 20th anniversary, which will take place in October – 20 years that have seen hundreds of newspapers closing around the country. In 2002, the signs were all around us but it took a few years to see the gravity of the situation. In 2002, the Philadelphia region had prosperous dailies and was ringed with well-read weeklies. Online news was having an impact but the greatest threat was from aggressive large companies buying newspapers and profiting from their demise.

So when my late husband, Joe, and I announced to our family members that we were starting a newspaper they were aghast, especially spouses of our offspring. Certainly most did not approve, but foolish parents that we were, we moved on.

And in many ways, ours was like a restaurant business – just about every family member was involved in some way.

Our grandchildren grew up with the Herald.

I was still nurturing the idea of starting a newspaper when I flew to Santa Fe for Aine’s first birthday. I had with me an article from the Inquirer that analyzed the population of Central Bucks County, an affluent area that held a lot of potential readers. Fortified with that information, I plunged into planning and Joe joined me. We rented a space and filled it with desks and computers, hired a graphic artist and editor, freelance writers, delivery drivers and advertising sales reps. We set two grandsons, Tom and Patrick, with paint and rollers to turn the dark walls and much of the floor, white.

One of the original staff members was daughter-in-law Angelica, a pianist, as an office manager. (A cabinet fell on her hand one day and I drove her to a doctor’s office and her hand survived.) Her son Gabriel came with her to work and napped under her desk. For the first months, when the printed papers arrived, my sister, who lived in Haycock Township, volunteered to deliver them to stores in Upper Bucks. When the Herald was six months old, we brought in lunch for a celebration. We did it again at our first birthday.

After five years, thanks to what was once Monument Bank, the Wingert family bought the Herald’s second home. By that time, some grandchildren were ready for internships. Brothers Joe, Matt and Jim took turns as interns and eventually Sarah and Keira spent time working for the Herald. Ellen never worked at the Herald but she stayed with me for a while and absorbed the culture – the constant conversation about local news.

Isabel and Liam didn’t work at the Herald but their names made it to print many times. Anton, born much later than the rest, was on the front page in a photo one September watching a school bus pull away with older children on board.

Tom is a marketing specialist and Patrick is a landscape architect, both working for international companies. Aine and Gabriel, both 21, are about to enter their senior year in college, Aine as an art history major and athlete, Gabriel headed for medical school. Joe is climbing a banking ladder in Philadelphia, Matt is an Air Force captain in the JAG Corps, Jimmy teaches middle schoolers in a city magnet school and Ellen is a physical therapist on the Main Line. Sarah has an online yoga business and Keira is a creative writer for a marketing company. Isabel is a biomedical engineer studying for her master’s degree and Liam is an electrical engineer working in Los Angeles for Boeing. Anton, a talented musician, is in middle school.

All of those grandchildren were in and out of the Herald office over the past 20 years, eating pizza, drinking tea, visiting Giggleberry Square and Peddler’s Village, or taking off to New Hope and Doylestown and Lake Nockamixon and the Delaware River. They have grown as the Herald has grown and they’ve created a timeline, a reference point for me as I prepare to leave the editor’s office.

Happy to Be Here: A timeline, parallel to the Herald’s growth

Happy to Be Here: Twenty years and counting

Happy to Be Here: Food and memories for the family