Tom McNutt with his wife, Helen, at a festive event.
Courtesy of the McNutt family
Posted Thursday, October 6, 2022 12:00 am 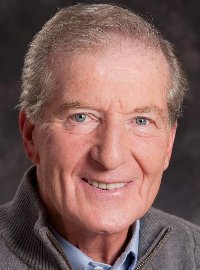 Thomas I. McNutt, who founded the theater program at Bishop McDevitt High School where he was idolized by students and staff alike, died Sept. 24 after suffering a heart attack at his Doylestown home. He was 87.

Besides his devotion to the theater, McNutt taught English and Latin for four decades at the Wyncote high school and was a highly respected actor, as was his wife of 52 years, Helen McNutt.

Before turning to education and acting, McNutt intended to become a priest. The son of Cornelius and Leona McNutt, Thomas was born in Philadelphia. He attended Holy Cross School in Mount Airy, then Northeast Catholic High School. He transferred from Northeast Catholic after his second year, enrolling in St. Charles Borromeo Seminary, where he completed high school and earned a bachelor’s degree in theology.

“Tom was truly a Renaissance man who adored theater arts, the written and spoken word, and maintained throughout his life an affectuous and deep spirituality that inspired all he met,” read his obituary.

As president of the Philadelphia chapter of the Screen Actors Guild and American Federation of Television and Radio Artists (SAG/AFTRA), he earned the respect of all who worked and associated with him. He was a member of Actors Equity and was active in the TV and Film Arts industry.

Tom and Helen each acted in many films and television shows including, “The Good Wife” and “Mare of Eastown.” Last year, Tom filmed “Cha Cha Real Smooth” with Dakota Johnson, the daughter of Don Johnson and Melanie Griffith, where he played Dakota’s grandfather.

McNutt, who was in recovery from addiction for 40 years, remained active in the recovery community and was a “Friend of Bills.”

His son, Chris McNutt, said his father’s recovery was “the foundation of all he did. The principles he followed, his selflessness, his helping others all came from his recovery.”

Jane Metzler, a former student of McNutt’s, told The Philadelphia Inquirer, “He gave everybody a chance, everybody; it didn’t matter who you were. I had such a firm foundation thanks to Tom McNutt — that love for theater, for the performing arts, for writing.”

Speaking to the Inquirer, Bill Hanley, a longtime friend and colleague of McNutt’s, said, “Tom represented Bishop McDevitt better than anyone who ever worked there. His fellow teachers loved him. When he entered the building, it was the same as the sun breaking through on a cloudy day.”

Earlier this year, the Inquirer reported, McNutt was honored as a “Legend of Bishop McDevitt” by an alumni group of the now-closed school.

Helen McNutt told the Inquirer her husband felt a deep need to give back. He marched for Black people’s rights as a young man in the 1960s, and he held the labor cause dear.

“He wanted to help, to make sure people are getting the proper representation where they work, and in what they do for their livelihood,” she said.

A deeply religious man, McNutt kept a book with the names of cherished friends and family members who had died, and he prayed for them daily, with special remembrances on the anniversaries of their death, the Inquirer reported.

Chris McNutt said his father made lists every morning of what he was going to do. “They always said something about his love for my mother and something religious. On the day he died, the last thing on his list said, ‘into your hands Lord.’”